The video game and the Art Professor behind Notre-Dame’s Digital Twin. 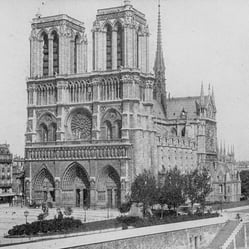 Last April, the world watched in horror as the 850-year-old Notre-Dame Cathedral was engulfed in flames in the heart of Paris. What took 182 years to build, blazed for 15 hours, sustaining serious damage.

The fire was not the architectural icon’s first tustle with decimation. This medieval masterpiece has been bullet ridden, smashed up by warring factions and also unwittingly left to the forces of nature to decay. And after each near death experience; Royalty, Governments, officials and dedicated enthusiasts have passionately harnessed the latest in engineering innovation to restore and improve it.

3D laser scanning and BIM modelling is already one of the top methods of preservation for historic buildings. If buildings are damaged, their models can be used to create period-accurate repairs. If they are destroyed, these models can live on forever in the form of a digital museum.

But it wasn’t a historical preservation society that took scans of Notre-Dame.

Instead, it was a video game and an Art Professor (in two separate projects) behind the digital data that could now inform the accurate rebuild.

Today, as reconstruction works recommence after Covid-19 delays – it’s a great time to reflect on an interesting story of one man’s passion for the precise digital capture of Notre-Dame, which might just be pivotal to it’s accurate resurrection. We found this great clip from CBS when researching the story… 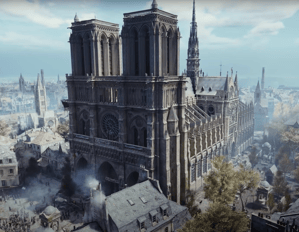 The video game, is the world famous Assassin’s Creed: Unity. A digital version of the cathedral, which featured in its 2014 release of Assassin's Creed Unity, was modelled over a period of 14 months. The game maker will donate €500,000 to the reconstruction of the fire-damaged Cathedral of Notre-Dame. BIM to inform gaming is something Unreal Engine, the makers of Fortnight, have also have done for a virtual Helsinki, in Clash of Worlds.

However it’s the work of a New York Art Professor in 2010, Andrew Tallon, that might provide the ultimate accuracy and integrity needed. Tallon (a Professor at Vassar), with the help of Professor Blaer from Columbia University, took a 3D scanner to Notre-Dame and began to painstakingly scan every piece of the structure, inside and out. He was passionate about the gothic icon. And digitising Notre-Dame for him was a two year project – from capture to model creation.

Tallon and Blaer’s laser data consists of 1 billion data points, structured as 'point clouds' which software has rendered into images of the three-dimensional space. When they are stitched together, inside and out, and photographs mapped onto the precise 3-D models, you have a full digital re-creation of incredible detail and resolution.

The government of France hopes the reconstruction of Notre-Dame can be completed by Spring 2024, in time for the opening of the 2024 Summer Olympics in Paris

If you want to read more of our adventures as we attempt to create A Smarter World, Digitally then subscribe below and follow us on Linkedin.

The BIM that saved a Bath House

As digital engineers, it’s very rewarding to wield the tech-tools that have the power to alter the course of history, by ...
Start Reading
October 2020 4 min read

As we’ve done since 2017, asBuilt are proud to support the School of Architecture, and Surveying students at Unitec – the ...
Start Reading
November 2020 4 min read

While many of us slept in on Labour Weekend, a crew of skilled engineers and crane operators from Fletcher Construction ...
Start Reading